Following its preliminary review of the Econometrix economics study on shale-gas, WWF-SA is of the opinion that the study is speculative and designed to play up the contribution of shale-gas with questionable assumptions of the size of the resource and its economic spin-offs.

Following its preliminary review of the Econometrix economics study on shale-gas, WWF-SA is of the opinion that the study is speculative and designed to play up the contribution of shale-gas with questionable assumptions of the size of the resource and its economic spin-offs - and without consideration for the social and environmental costs.

WWF’s analysis indicates that the study is not scientifically rigorous in that it presents only the most optimistic case for shale-gas extraction, downplaying less encouraging scenarios and thereby compromising the results of the study.

The risk of premature speculation is clear in the case of the US, where shale-gas estimates of unproved technically recoverable shale-gas was downwardly estimated by close to 50% for the national estimate from close to 850 trillion cubic feet (TCF) to close to 490 TCF; and the Marcellus shale-gas fields were down-graded by nearly 80%. The study’s overestimation of the productivity of the Karoo shale-gas resources and viability places the report’s projections of economic turnover and job prospects on shaky ground.

“While it is important to put numbers on the table, they must be based on fact rather than conjecture of what economically viable reserves might look like,” says WWF-SA Living Planet Unit head Saliem Fakir.

Any analysis of the economic viability of shale-gas would need rigorous analysis that identifies variable options sensitive to changing estimates over time. Shale-gas estimates are highly vulnerable to revision as shale-gas well productivity rates have been found to decline by as much as 50% to 80% per well within the first two years of production. As well productivity rapidly decreases, wells would need to be re-fracked several times: amplifying environmental risks, water consumption and energy consumption. All of these add to additional costs.

The study’s biggest weakness is that it does not take into consideration the full costs of shale-gas extraction, including the social and environmental externalities, such as potential impacts on water supply sustainability and contamination or the cost of a carbon tax.

With South Africa’s undeveloped gas market, questionable productivity of shale-gas wells based on current US experience, places both the resource availability and economics of fracking in doubt.

“The study was designed to create hype, justify exploration and present a picture of shale that may not be warranted,” says Fakir. “The study is not enough to substantiate why shale-gas investments in South Africa is a better trade-off compared to imports of conventional gas from neighbouring states.” 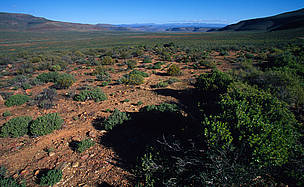 The Karoo - an area of increasing interest for big energy companies