Hunger and the future shocks that our cities face

The Covid-19 pandemic has laid bare the deep fault lines that exist in our urban food systems. If we are to build climate resilience, this will have to change, writes Ivanna Katz.

There is growing evidence that the same human activities that contribute to climate change are responsible for the emergence and spread of new diseases.

Population expansion and increased density as well as increased globalisation of trade and travel work “synergistically with climate change to produce an explosive emerging disease crisis”, says development researcher John Cadham. He suggests that rather than the one begetting the other, climate change and pandemics are “co-travellers”.

As such, a city’s resilience to climate change relates directly to its resilience to the impact of pandemics and, given the way the current pandemic is playing out, it’s clear our cities are not sufficiently prepared for modern climate shocks and stressors.

Among the deep fault lines that Covid-19 has revealed are those that exist in South Africa’s urban food systems running parallel to those of income inequality.

As the first wave of the pandemic hit the continent, almost 80% of African nations implemented a full or partial lockdown, forcing millions to stay at home to slow down the spread of the virus. While these measures seemed to have done so effectively, they came with a hard economic hit.

A recent report commissioned by WWF South Africa (Urban Lockdown Lessons from South Africa: Insights and Opportunities for Equitable Food Systems) points out that for the poor, this loss of economic livelihood only served to worsen an already dire situation. Many residents of marginalised areas not only had to deal with increased food prices but were also faced with limited access to food due to the suspension of school feeding schemes and the closure of spaza shops and informal markets.

In South Africa, the impacts were particularly disastrous, with almost half of households reporting that they had run out of money for food in the first month of the lockdown, and 8% of households reporting frequent hunger. In addition to other factors affecting access to food for vulnerable populations, including restrictions on informal food trade and related increases in transport costs, the pandemic severely impacted food security at a household level.

In response to this severely exacerbated poverty and accompanying hunger, the government’s primary response was in the form of the Special Covid-19 Social Relief of Distress grant to the sum of a R350 a month. Considering the 2.2 million livelihoods lost during 2020, it is clear that even in households with two adults receiving this grant, it didn’t come close to accommodating the purchase of a full, nutritious monthly household food basket.

This severe shortfall has highlighted the role of civil society organizations and communities in ensuring urban food security – with 6% of adults reporting that they went in search of food or shelter from NGOs, churches, other associations, and 9% from neighbours and the community, even though three quarters of them were already receiving the government grant.

With no formal mandate to address food insecurity, district, metropolitan and local governments have not engaged with food systems in general, something which became evident during the crisis brought on by the pandemic. This will have to change if urban areas are to gear themselves for the future, particularly for climate resilience.

Based on the challenges that were identified in various parts of the food systems, the WWF report puts forward a range of recommendations. These include enabling food trade and urban food production; supporting health and the built environment; engaging the informal sector; tackling climate issues; and expanding social relief efforts.

The report’s recommendations all point to how local governments (metropolitan, district, and local municipalities) have an active role to play in transforming urban food systems. Points of engagement include the integration of urban agriculture into city planning, promoting safe reuse of urban waste and wastewater in urban and peri-urban agriculture, and building the capacity of small local enterprises in food processing and distribution.

Transformed urban food systems will not only help to limit hunger but also prepare our cities for future climate stressors and shocks which are inevitably part of our future. The real challenge here is not a struggle to produce more food but the creation of a social environment that distributes the risks and resources more equitably. 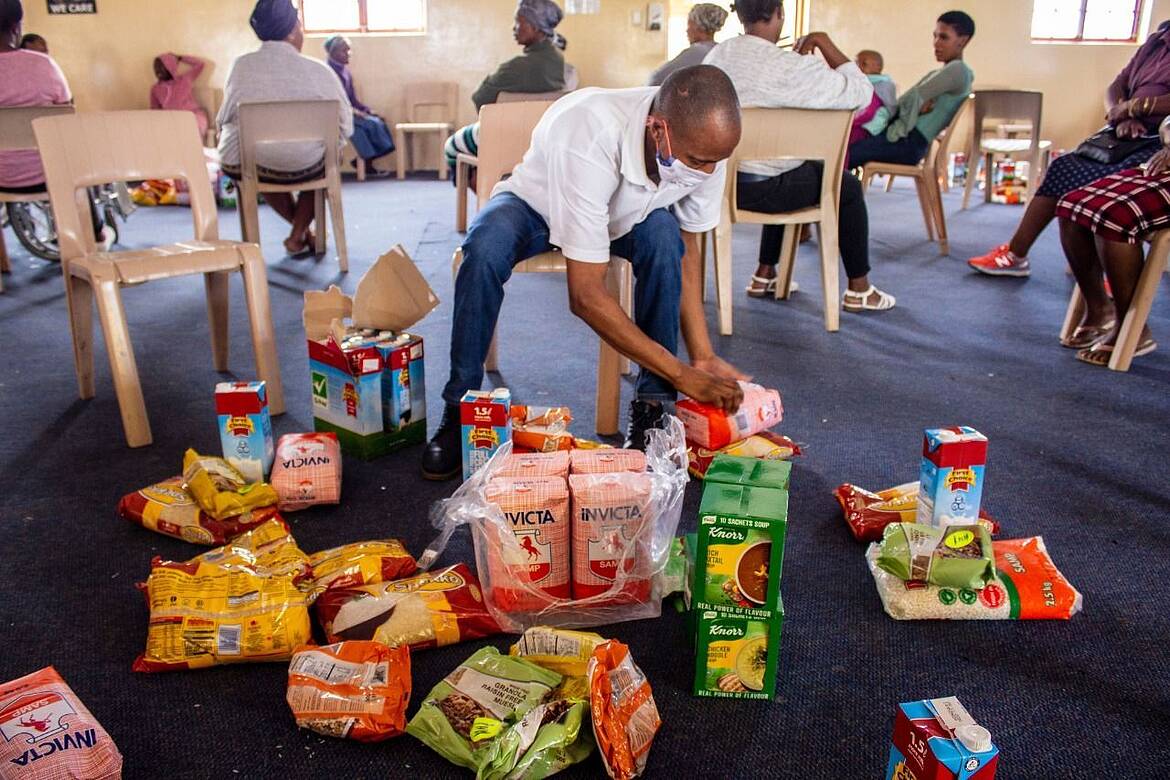 Food donations are packaged for distribution in Masiphumelele in Cape Town during the Covid-19 crisis.

Picking up the pace for climate impact