Law enforcement agencies globally must address rhino horn trafficking as a form of transnational organised crime along with an increased focus on the higher level actors in the rhino horn supply chain.

This was the key message that emerged from a joint webinar hosted by WWF South Africa and the Wildlife Justice Commission to mark World Rhino Day 2022.

The webinar focused on the status of African rhino populations and gave insight into an analysis of the trafficking of rhino horn over the last decade. The findings of this analysis will be published in a Wildlife Justice Commission report ahead of the CITES COP19, to be held in Panama City in November this year.

The aim of the report is to produce a comprehensive assessment of the current threat to rhinos in 2022 to inform law enforcement, conservation and policymakers’ interventions to tackle the illegal rhino horn trade and ensure that the global response is commensurate and appropriately targeted to current needs.

Sarah Stoner, Director of Intelligence of the Wildlife Justice Commission, said there was irrefutable evidence pointing to the involvement of transnational organised crime as a key driver of rhino poaching and rhino horn trafficking.

"As a high-value criminal commodity, illicit trade in rhino horns is showing no signs of abating. The threat must be addressed as a crime crisis rather than just a conservation crisis," she said.

Corruption was also found to be a crucial enabler of all forms of wildlife crime, helping criminal operations to acquire and move rhino horns throughout the supply chain and undermining the criminal justice system.

In an overview of the latest population figures for African rhinos released by the IUCN African Rhino Specialist Group (AfRSG), Jo Shaw, Africa Rhino Lead with WWF, said that it was positive to see an increase in numbers of the Critically endangered black rhino. Populations have increased 3% per annum from 2017 to 2021, reaching a total of 6 195 by the end of 2021.

However, it was concerning that numbers of the more numerous white rhino declined to 15 942 and were 11.8 % lower at the end of 2021 than the 18 067 white rhinos recorded at the end of 2017.These declines predominantly occurred in the large, state-managed protected areas in South Africa.

“Entrenched organised crime networks co-ordinating these crimes threaten not just rhinos but also the people who conserve them and societies living around conservation areas,” she said.

Shaw added that the IUCN AfRSG report on the newly released population figures showed that rhino populations that were co-managed, through partnerships such as those between local people, the private sector and state agencies, were performing better than those that were managed solely by state agencies.

This underscored the significance of the Kigali Call for Action for People and Nature from the recent African Protected Areas Congress which has emphasised the important role that local communities play in the future of biodiversity conservation in Africa. 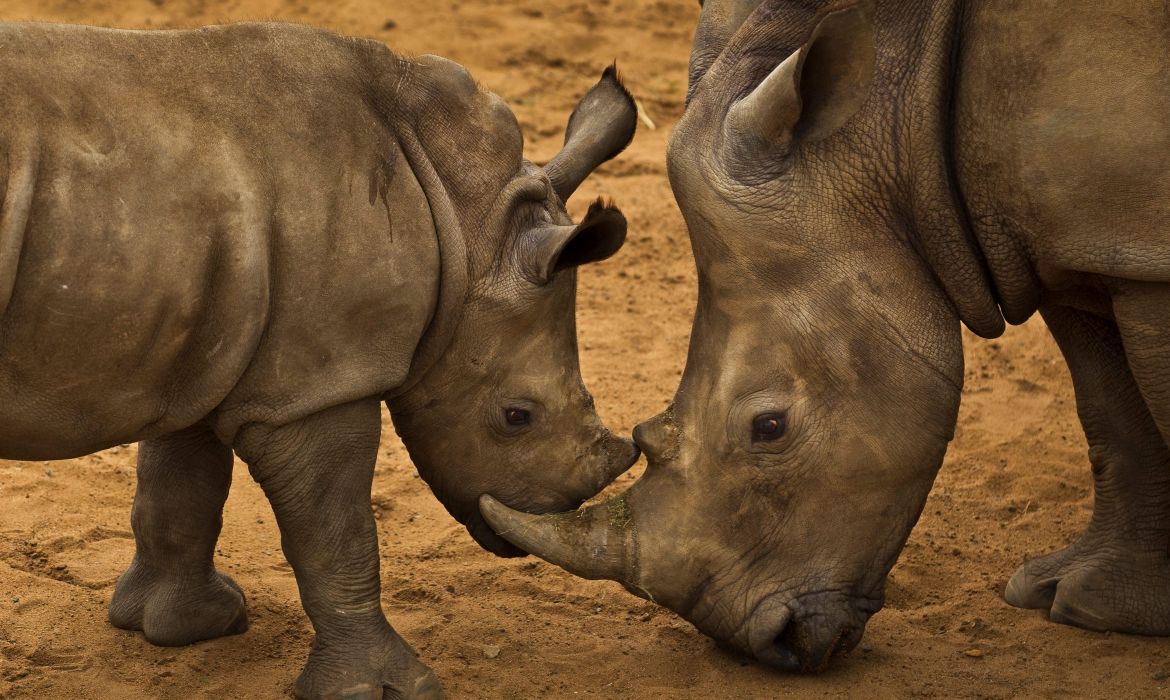 A white rhino cow with her calf. White rhinos numbers have declined while black rhinos have increased over the past few years.

New climate podcast for the youth