From a bird perspective, 350 of South Africa’s 844 bird species occur in our grasslands, 40% of which are ‘grassland specialists’, meaning they do not live anywhere else. Yet grasslands are arguably are most threatened biome in South Africa.

Grasslands are critical water storage, biodiversity and food production areas for South Africa, yet 65% of South Africa’s grasslands have been irreversibly transformed, and only 2.8% are formally conserved – mostly in the Drakensberg. Mining and development are two of the main causes of grassland destruction, with most of South Africa’s mineral resources and 50% of Gauteng situated in the grasslands.

“Grasslands are arguably our most threatened biome in South Africa,” explains Charmaine Uys from BirdLife South Africa who is the project leader of the Endangered Grassland Birds Project funded by the WWF Nedbank Green Trust. One of the key aims of the project is to develop habitat management plans for the grassland biomes of Mpumalanga and the Free State, based on endangered indicator bird species. These plans complement existing grassland conservation guidelines and programmes, which is a focus area for the WWF Nedbank Green Trust.

“From a bird perspective, 350 of South Africa’s 844 bird species occur in our grasslands, 40% of which are ‘grassland specialists’, meaning they do not live anywhere else,” Uys explains. Amongst these are 29 of the 125 South African Red Data bird species, which occur in grasslands and associated wetlands, including all five of South Africa’s critically endangered bird species: the Wattled Crane, Blue Swallow, Rudd’s Lark, Eurasian Bittern and White-winged Flufftail.

“We have a huge responsibility to protect these birds together with the grassland environment in which they live and breed, especially when you consider that there are only about 270 Wattled Cranes left in the wild, and very few breeding pairs - probably only about five in the whole of Mpumalanga,” says Uys.

Another example she offers is the White-winged Flufftail, a migratory species that flies from their breeding grounds in the Ethiopian highlands to roost in perhaps only five wetlands in South Africa, one of which is the Middlepunt Wetland in the Steenkampsberg, north of Belfast in Mpumalanga. “This same wetland is home to the Wattled Crane and numerous other Red Data-listed species, yet it is facing huge mining threats. We are currently fighting to protect it from a coal mine on the one side and a diamond mine on the other,” explains Uys. “We are not against mining, but we are appealing for more prudent consideration of where mining applications are granted, not only from a bird species conservation perspective but also from a water and food production perspective.”

One of the focal areas for the endangered bird species management plan is Chrissiesmeer near Ermelo in Mpumalanga, a critical water storage area known as the Mpumalanga Lakes District. Four major rivers flow from here, including the Vaal, Usutu, Komati and Tugela, on which Gauteng depends for clean water.

“We are working closely with the provincial nature conservation agency here, as we are in our other project area in Memel in the Free State. We are also partnering with WWF and the Endangered Wildlife Trust (EWT) in the project areas to secure privately owned land through the biodiversity stewardship programme for the establishment of two new Protected Environments,” Uys explains. “At Chrissiesmeer we have assessed 58 100 hectares of farmland and at Memel 38 400 hectares of farmland. In both instances, they are predominantly cattle and sheep farms, and the farmers have been highly enthusiastic.

“In the Free State, for example, it is the first time that biodiversity stewardship has ever been attempted, and the interest has been overwhelming. The farmers are starting to take ownership of their land in the best conservation sense and they respond to our excitement about the exceptional bird species on their land and the amazing orchids and other special plant species that occur there.”

Steenkampsberg, Chrissiesmeer and Memel were identified as Important Bird Areas (IBAs) in 1998. South Africa has a total of 124 IBAs, and the top priority IBAs in need of urgent conservation action are in the grasslands.

All three of South Africa’s Cranes (Wattled, Grey Crowned and Blue) occur in Chrissiesmeer, which has 320 natural pans and the largest inland lake in South Africa (1150 hectares when full). It’s an exceptionally important area for waterbirds, and many of our threatened grassland bird species occur here, including Blue Korhaan, African Grass Owl and African Marsh Harrier.

Some of the properties in the Memel area are of such environmental importance that they qualify to apply for Nature Reserve status. “They have critically endangered species like the Wattled Crane and Rudd’s Lark breeding on their properties, as well as breeding colonies of the Southern Bald Ibis, listed as vulnerable. They are also on threatened grassland types,” Uys explains adding that there are five threatened ecosystems in the Free State, and four of these occur in the Memel area.

Both Chrissiesmeer and Memel are targets for mining, mainly open cast coal-mining. “We are hoping to secure these areas for conservation within a year or two through the Protected Environment stewardship process,” says Uys who incorporates community environmental education as an important part of their work. “In addition to the farmers and landowners, we get learners and citizen scientists, such as Bird Club members, involved in the conservation work we are doing in their area, and it’s really motivating to experience how keen people are to understand about conserving their environment and the species that inhabit it.” 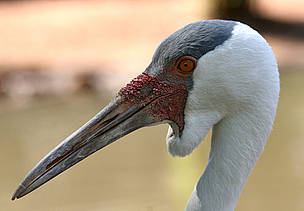