Profile of a rhino horn user

As of 24 July, 514 rhinos have been poached in South Africa this year. The iconic species is being targeted for its horns, believed to be a treatment for fevers and hangovers in certain countries in the Far East. The truth is, horn is made of keratin, the same substance as hair and fingernails. Why is it so popular then?

As of 24 July, 514 rhinos have been poached in South Africa this year. The iconic species is being targeted for its horns, believed to be a treatment for fevers and hangovers in certain countries in the Far East. The truth is, horn is made of keratin, the same substance as hair and fingernails. Why is it so popular then?

WWF South Africa’s Jo Shaw, the coordinator of our rhino programme, travelled to Vietnam to help develop a campaign to manage the demand for horn from the East. Vietnam is one of the major markets for illegal rhino horn, and economic developments there are proving to be a key factor in the consumption of horn.

With 66 per cent of Vietnam’s population under the age of 30, Shaw explains, “there’s a feeling of burgeoning wealth, power and success” among this young nation. “For the first time many Vietnamese have access to an increased disposable income and you can feel the wave of money starting to grow”.

In partnership with TRAFFIC (the wildlife trade monitoring network), WWF South Africa has funded the most comprehensive consumer research ever undertaken into the use of an illegal wildlife product in Vietnam. In research conducted by IPSOS, 600 middle-upper income adults were surveyed in the major centres, Hanoi and Ho Chi Minh City. The survey results support Shaw’s observations and provide useful insight into who is buying and using rhino horn, and more importantly why.

Wealth
Rhino horn is primarily used by the upper echelons of Vietnamese society. According to a male buyer in Hanoi, “wealthy people buy it in order to show off; it’s like a ‘treasure’ in their house. They have something to show off when needed”. Rhino horn is very expensive and rare, which adds to its appeal.

Research reveals users of horn tend to be wealthy, over the age of 40 and living in Vietnam’s main urban centres. They value their lifestyle and status, and do not show empathy for animals.

Power
Rhinos are thought to be strong and powerful animals – a symbol of immortality and being “unconquerable”. Giving rhino horn as a gift to your boss, high-ranking officer or relative is seen as a sign of respect and admiration, especially in Hanoi. It is also used to smoothen business deals.

Health
According to an expert in Hanoi, users of rhino horn say they feel, “more comfortable in their bodies, tend to eat better, have better urine colour, and enjoy a more regulated body temperature”. Rhino horn is also believed to “help late-stage cancer patients to feel comforted”. This echoes the sentiments of many Vietnamese who believe it is worth trying rhino horn in support of Western cancer medicine or when such treatment fails. Rhino horn is also used to enhance sexual experience.

Peace of mind
An overarching driver among the Vietnamese is the belief that possession of rhino horn brings peace of mind. It is seen as a “nice to have since you never know when you will need it”, especially as it’s believed to reduce toxins in the body. Overall, the research indicates that awareness of the perceived benefits of rhino horn is close to universal and that many more people would like to buy horn than can afford to at present.

According to Shaw, buying and using rhino horn is seen as socially acceptable and almost something to be proud of. There are traditional markets that sell horn, but what they sell is usually a fake product, not the real thing. Real rhino horn is usually distributed through ‘trusted, word-of-mouth sources’.

These research findings are a valuable entry point to understanding how rhino horn is used in Vietnam. WWF is working on a campaign that will seek to change behaviour and attitudes toward horn in these markets, knowing that the war against rhino poaching will be won not in Africa but in Asia. 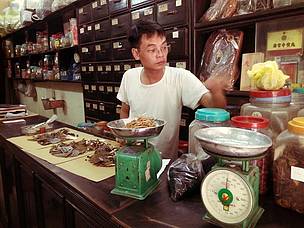 This man runs a traditional medicine store in Vietnam. Such shops rarely sell real rhino horn, which is hard to obtain and usually distributed through trusted, word-of-mouth sources.