A Thai national, Chumlong Lemtongthai, has been sentenced to 40 years imprisonment for his involvement in the illegal trade of rhino horns from South Africa. This is the harshest sentence given for a wildlife crime in the country to-date.

A Thai national, Chumlong Lemtongthai, has been sentenced to 40 years imprisonment for his involvement in the illegal trade of rhino horns from South Africa. This is the harshest sentence given for a wildlife crime in the country to-date. Lemongthai pleaded guilty to charges relating to the illegal export of rhino horns in Johannesburg’s Kempton Park Magistrate’s Court earlier this week. WWF-South Africa (WWF-SA) applauds the efforts of the South African Revenue Services and other law enforcement agencies for the successful arrest, prosecution and sentencing of the highest-ranking rhino syndicate member to be brought to book in South Africa.

“It is so important that all those involved in rhino crimes receive sentences which match the severity of their actions to form an effective deterrent to others”, says Dr Jo Shaw, Rhino Co-ordinator for WWF-SA. “These higher-level arrests and convictions are critical to disrupting the illegal trade chains used to move rhino horns into illicit markets in Asia”.

Lemtongthai played a principal role in a syndicate which used white rhino trophy hunts in South Africa to obtain horns to trade in the Asian black markets, a practice known as “pseudo-hunting”. During court proceedings, Lemtongthai confessed that the hunters were a front for exporting rhino horn for commercial trade and not for trophies. His syndicate enlisted people from Asia to pose as hunters and participate in white rhino trophy hunts on game farms in the North West province. In response, the South African government updated legislation to clamp down on such loopholes, including a ban on rhino hunting by Vietnamese Nationals since April 2012.

In a statement to the court, Lemtongthai said, "I humbly apologise to the court and to the people of South Africa for my role in this matter. I appreciate that the emotions of all animal lovers in South Africa are running very high and that I was part of the problem.”

However, it is of concern that all charges against Lemtongthai’s co-accused (three South African and two other Asian nationals) were withdrawn without explanation. Sadly, this does not send a similarly strong message regarding South Africa’s attitude to the ongoing involvement of its own citizens in rhino crimes.

This case and recent rhino poaching incidents in the North West Province highlight the ways in which criminal elements are abusing the permit system in their quest for rhino horn. There remains an urgent need for the South African government to implement a national electronic permit system to centralise and better monitor this information. WWF also calls for greater collaboration between South Africa and Asia in monitoring rhino horn trophy exports to prevent them being drawn into illegal trade. 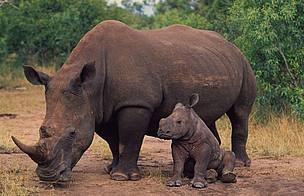 A Thai national, Chumlong Lemtongthai, has received the harshest sentence given for a wildlife crime in South Africa.