In the letters, sent this month, WWF emphasises that “the crisis, in addition to being grounded in mismanagement of national finances, is a reflection of a deficient economic development model built on overconsumption and a steadily increasing ecological deficit and natural resource overexploitation”.

Focusing on the case of Greece, global conservation organisation WWF highlights a series of significant environmental setbacks resulting from the economic adjustment programme for Greece approved in May 2010, co-financed by the International Monetary Fund (IMF), the European Commission (EC), and the European Central Bank (ECB).

WWF’s letters identify the following environmental problems occurring behind the headlines of the impending Greek economic and social crisis:

“During the past 15 years, WWF has repeatedly called on international financial institutions, including the IMF, to revise their lending policies and support the transition of financially troubled countries towards a development path that is environmentally and socially sustainable. This call has become more urgent as economic activity is rapidly surpassing nature’s budget”, said Jim Leape, Director General of WWF International.

“Now is the time for the European Commission to honour its role as guardian of the EU’s treaties and environmental policies”, said Tony Long, Director of WWF’s European Policy Office. “We call on the EU to expand its considerable work on sustainability – not as a separate agenda, but rather as a pillar for durable and healthy economies, even in times of financial duress.”

“The crisis in Greece is causing serious social hardship but the environment is also being hit as a result of problematic policies,” said Demetres Karavellas, Director of WWF Greece. “The Greek Government is sidelining the sustainable development agenda with the approval of the IMF, the EC and the ECB. WWF calls on the troika of lenders – the IMF, the EC and the ECB – to recognise this alarming trend and offer the necessary support, in order for Greece to plan and follow a more environmentally and socially sustainable development path. Failure to do so is seriously undermining our future.” 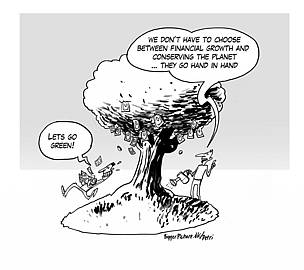 We don't have to choose between financial growth and conserving the planet.