Environmental and Rural Solutions (ERS), based in Matatiele in the Eastern Cape, has just celebrated its 20th anniversary. ERS is a long-time partner of WWF and the WWF Nedbank Green Trust.

“We are rural people who want to do good for other rural people”, says soil scientist Sissie Matela of Environmental and Rural Solutions (ERS), a non-profit social enterprise that she and environmental scientist Nicky McLeod established in the Eastern Cape village of Matatiele 20 years ago.

Matatiele is situated in the upper uMzimvubu river catchment, which is part of the southern Maloti Drakensberg watershed, extending all the way to the river’s mouth in the Indian Ocean at Port St Johns. The third-largest river system in southern Africa, it is every bit a water factory draining over two million hectares and contributing to the country’s water supply for hundreds of kilometres, as far as Johannesburg.

Both women have done exceptional work in improving rural livelihoods through a series of ‘landscapes and livelihoods’ projects. Their unique partnership will be featured on the BBC StoryWorks platform as an exceptional example of agency in action, for which Matela and McLeod received WWF’s Living Planet Award in 2019.

‘People need to be able to make a living where they are,’ says Matela. ‘When you see young rural girls and boys walking down the road smiling and chatting, you wonder where they will end up, and how they can develop skills and employment for a better future. Some of them will be able to pursue higher education or find work in the cities, but what about the majority?’

Over two decades, Matela, McLeod, their ERS team and partners have incrementally created jobs and increased sustainable self-employment, predominantly through livestock farming – the main source of income in the area – as well as through microenterprises, and by training a team of young people to be part of ERS. More recent projects include the development of smallholder vegetable farming and a pilot microenterprise that removes alien invasive wattle trees from the riverbanks to make eco-friendly charcoal.

All ERS projects are centred on growing the green value business chain through the uMzimvubu Catchment Partnership (UCP), a communitywide programme of landscape and water rehabilitation, combined with a managed livestock grazing regime, in partnership with six local chieftainships.

‘Our work starts with people’s livelihoods, as it’s so much easier to engage people in environmental conservation if we improve their livelihoods,’ Matela explains. ‘When livestock gets fat and healthy, the farmers and their families get happy as they make more money at the livestock sales.’

WWF’s water source areas manager, Samir Randera-Rees who works closely with ERS, and who helped lead a recent WWF Nedbank Green Trust field trip to the area, says: ‘It’s a good story to tell because the projects are not only critical for local livelihoods and conservation, they are also critical for the whole country because this is one of a handful of strategic water source areas (SWSAs) in South Africa.’

SWSAs cover less than 10% of South Africa’s land surface but provide more than 50% of the entire country’s water. The country is disproportionately reliant on water from the SWSAs, and they need to be carefully managed at all levels – from policy and legislation, all the way to what happens on the ground.

‘The Matatiele region is ideal cattle country, with rich grasslands and wetlands,’ McLeod explains. Healthy grasslands, soils and wetlands are integral to water management; they slow down the water flow from the top of the catchment that recharges the rivers and streams, and they form a landscape ‘sponge system’ whereby the water can be absorbed across these areas and slowly released during the course of the year.

‘Well-managed grazing keeps the grasslands and wetlands healthy, and the soil mantle intact,’ McLeod explains. ‘Unmanaged grazing leads to grassland degradation and severe soil erosion, which undermines the water catchment system, as is evident in large parts of this province.

‘Our team works in partnership with the communal farmers in six chieftainships spanning 55 rural villages to reintroduce some of the traditional methods of rotational grazing and rest, in combination with high-density, fast-rotation grazing to improve the health of the rangelands,’ McLeod explains.

As part of the communal grazing project, ERS is working with a mobile cattle auction company called Meat Naturally Africa (Pty) Ltd. Meat Naturally brings a mobile auction to their community and they sell their cattle in situ at competitive prices. Community livestock sales fetch between R1 million and R2 million at each auction.

To tackle the wattle infestation in the region’s river courses, a Forest Stewardship Council-accredited eco-friendly charcoal production microenterprise, Ecochar, is being piloted in one of the tributaries of the uMzimvubu river. Here, several young people from the area, are hard at work, cutting down alien invasive silver wattles from parts of the riverine area.

Chainsaw operator Thobani May, who leads the business, explains that they reduce the wood into kiln-size logs and bake them in two kilns at 600° C. One kiln uses one ton of wattle wood to produce up to 180 kg of eco-friendly charcoal.

The project is supported by Avocado Vision, a small-business-development company whose managing director, Henry Sebata, explains: ‘We change this liability into an asset; in turn it frees up water and we can start the process of grassland rehabilitation where the wattles have been removed. Our vision is to help to drive the eradication of alien invasive species through microenterprises and SMMEs. The team clears two to four hectares in a month and the project is certified by the FSC.’

Randera-Rees says an idea being explored is payment by companies for ecosystem services, such as the freeing up of water. The FSC wants to create water, air and biodiversity targets, for which credits could be bought off the platform. Credits, for example, could be based on how much water would return to the environment per hectare cleared. The whole process would be tightly audited.

Also part of the UCP effort is a WWF Nedbank Green Trust project that is making headway on the construction of 18 spring capture systems. These will offer fresh, clean quality water to 600 households in 12 villages.

Matela explains that their work is never done. The overarching goal of the UCP now is to establish the Maloti Thaba Tsa Metsi Protected Environment (MTTMPE), a 48 500 hectare protected area including all six chieftainships along the Umzimvubu watershed. The National Department of Land Affairs has given the go-ahead, and all participating communities have signed resolutions for their land to be declared a protected environment.

A 20th anniversary celebration for ERS was held in Matatiele. Matela and McLeod were honoured for the long walk they have done with the rural people of Matatiele and their project partners. At the event, WWF CEO Morné du Plessis remarked: ‘When you see the scale of the work being undertaken in this area, you think it’s impossible until you see the sparkle of passion in the eyes of the people involved in it. It motivates us to bring the full might of public-private-government projects to this project and to all the projects we are involved in throughout South Africa.’ 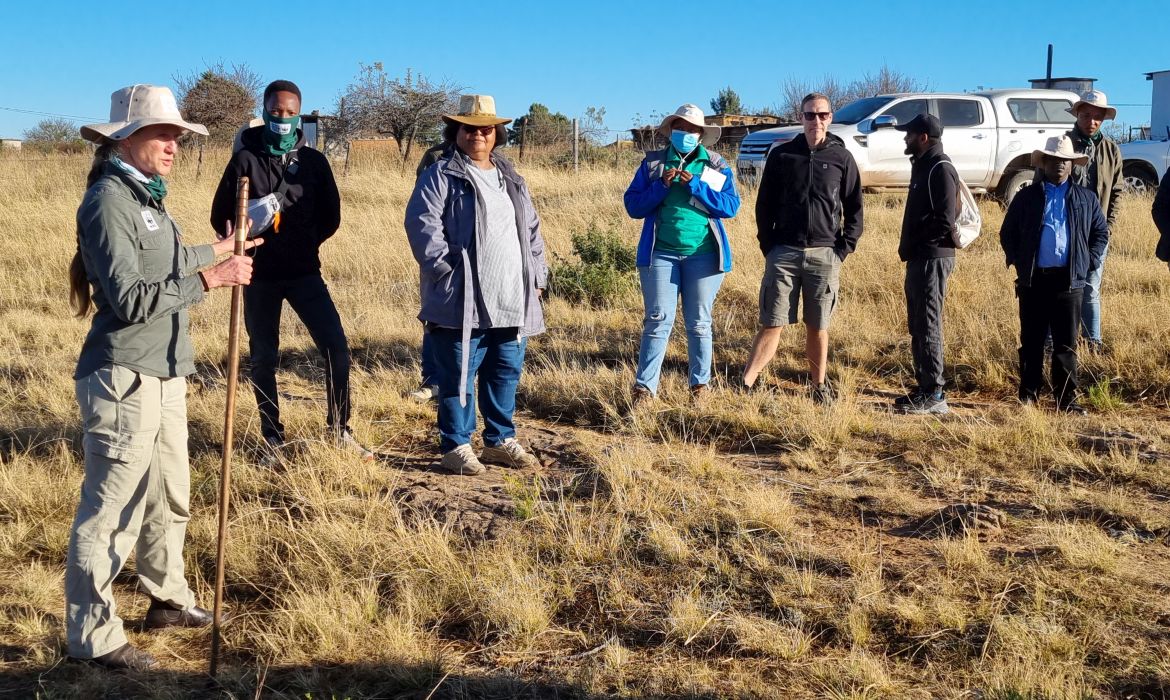 Nicky McLeod, left, with her partner Sissie Matela, third from left, talk about their work during a WWF Nedbank Green Trust field trip in Matatiele.