Mural art for our invisible water

Two striking new murals at the V&A Waterfront in Cape Town underscore the importance of groundwater in times of climate change.

The Cape Town groundwater murals were conceptualised and created by artists Eske Touborg of Denmark and Nardstar of South Africa – and are located at Makers Landing, the newly refurbished cruise terminal in Cape Town harbour.

The striking murals are testament to Denmark’s longstanding contributions to, and collaboration with South Africa. Denmark relies on groundwater and has much technical expertise in the management of this resource.

In 2022, the UN’s World Water Day focused on groundwater: ‘Making the invisible visible’. To help make Cape Town’s invisible groundwater more valued, the collaborative mural concept was born. The aim of this public art project is to raise awareness about climate change and water scarcity.

Nardstar’s work depicts a “water goddess” named Camissa, after the Khoi name for Cape Town which means “place of sweet water”. Touborg’s work is called Zipper and depicts a human hand gently unzipping the land in front of Table Mountain to reveal the water below – highlighting humanity’s interaction with nature.

Since 1994, Denmark has supported South Africa on the sustainable use of its water resources. The Danish Embassy is also part of the Table Mountain Water Source Partnership, a multistakeholder collaborative platform which focuses on Cape Town’s crucial aquifers and their groundwater supply to ensure sustainable management and use.

Speaking at the official unveiling of the murals, Danish Minister for Development Cooperation and Nordic Cooperation Flemming Møller Mortensen said he hoped the artworks would be to open the eyes of visitors to Cape Town to the link between climate change and water. He stressed that climate change was synonymous with “water change” which in turn had implications for food security.

The importance of fresh water is very evident to residents and businesses in the Western Cape. Following the severe drought of 2015 to 2019, Cape Town was close to becoming the world’s first major metropolitan area to run out of water. Referred to as ‘‘Day Zero’’, Cape Town’s storage dams were at an all-time low in early 2018. This resulted in an increase in the drilling of boreholes to access the reserves of natural groundwater.

South Africa is among the top 30 most water scarce countries in the world and receives half the average global rainfall. With the increasing impacts of the changing climate, it is essential that there are national and local plans to sustainably manage this precious resource across all parts of the water value chain: from the source of our fresh water in the high-altitude, high rainfall mountain areas – our strategic water source areas – to the groundwater in our underground reserves.

This public art project was funded by the Embassy of Denmark, AP Moller-Maersk and the Table Mountain Water Source Partnership and WWF in partnership with the V&A Waterfront, City of Cape Town and Free The Walls. 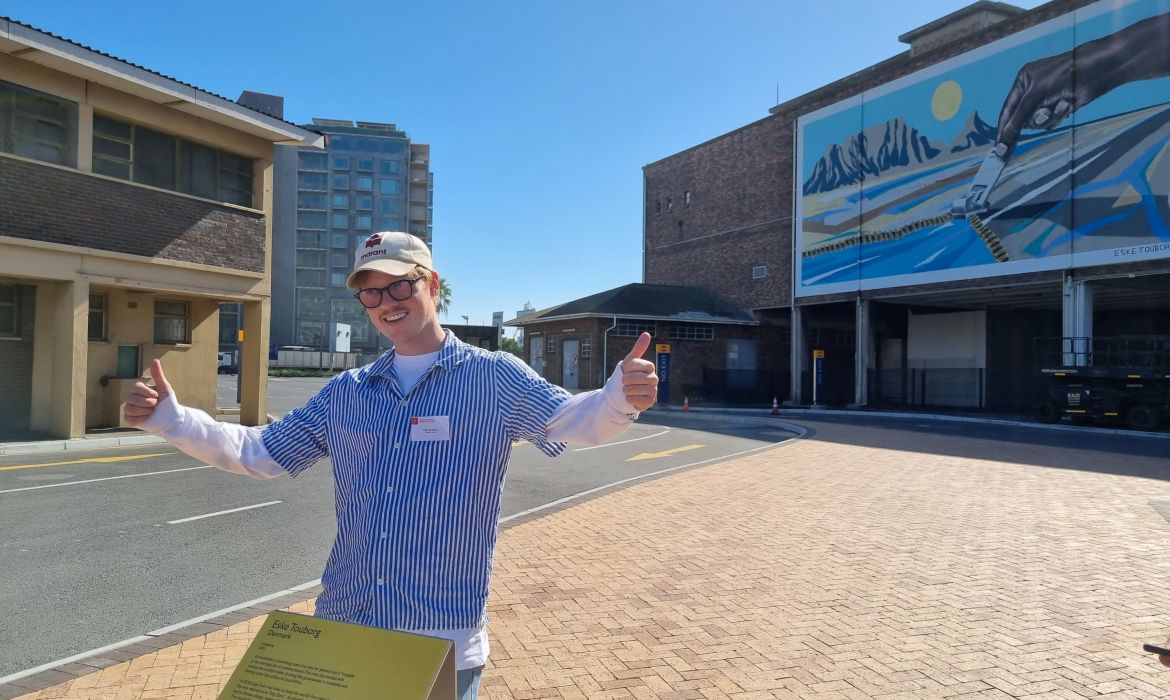 Danish artist Eske Touborg at the unveiling of his artwork titled 'Zipper' which illustrates the relationship between ourselves and how we manage precious natural resources like groundwater.