Meet the WWF-SASSI Trailblazers 2019, chefs who are committed to sourcing, preparing and serving sustainable seafood at their restaurants.

“This year’s winners have committed to only selling and serving sustainable seafood and have clearly demonstrated that one can turn out creative and innovative recipes when serving green-listed seafood.  The 2019 trailblazers are real ocean stewards and are ensuring the longevity of our ocean resources for all,” said Pavitray Pillay, WWF-SASSI Manager.

Kyle Knight, The Shop, Seapoint, Cape Town
Kyle Knight is chef/owner of The Shop, a Sea Point bistro where he and his wife Gabi put the emphasis on traceability and the sourcing of ingredients. Their menu changes frequently: If it’s fresh and in season on the day then it makes its way onto the menu. They describe their style as “simple, tasty and uncomplicated”, opting for free range, green-listed and sustainable produce with an emphasis on seasonality and provenance.

Nicole Loubser, Gåte Restaurant, Quoin Rock, Stellenbosch
Namibian-born Nicole Loubser studied at the Institute of Culinary Arts in Stellenbosch. Ambitious and passionate about sustainability she likes to push culinary boundaries and has tripped the light fantastic at La Colombe, The Test Kitchen, and at JAN in Nice. She now heads the kitchen at Gåte Restaurant on Quoin Rock wine farm near Stellenbosch where she is putting all her high-end experience to good use. At a relatively youthful 25, Nicole is set to leave her mark on the culinary scene in South Africa.

Gustaaf Boshoff, The Green Goose, Stellenbosch
Gustaaf Boshoff was bitten by the food bug at an early age and his passion drove him to study to become a chef. After graduating from culinary school, he honed his skills in Michelin-starred establishments in Europe. The Green Goose is his homage to showcasing humble dishes but with a fine-dining twist. He opts for sustainability and is very clear with all his suppliers that he wants to source ethical and seasonal ingredients.

Carolize Coetzee, Tokara, Stellenbosch
Carolize Coetzee hails from Humansdorp in the Eastern Cape and she takes her inspiration from heirloom recipes from her mother and her grandmother. Her most cherished food memories are rooted in traditional, locally sourced, seasonal ingredients. With her dedication to South African flavours, sustainability frames her cooking. The organic vegetable garden attached to the restaurant puts sustainability and ethical practices at the centre of the kitchen at Tokara.

Matt Manning, Grub & Vine, Cape Town
Matt perfected his trade in London under the likes of Marcus Waring and the one-and-only Gordon Ramsay. On relocating to South Africa he joined the brigade at La Colombe before moving on to become the king of pop-ups on the Cape Town foodie scene. Last December he opened his first fully fledged restaurant called Grub & Vine where tasty sustainable dishes are finely crafted at this stylish bistro on Bree Street. He only uses green-listed fish on his menu.

Guy Bennett, Gigi Rooftop, Gorgeous George, Cape Town
At the age of seven, the food markets of Paris made a big impact on this young epicurean. Guy works with seasonally sourced ingredients and local suppliers, including farmers who share his food philosophy. He likes to know where the produce comes from and he needs to know that ethical practices were followed in its journey from sea and farm to plate. His own journey has seen him work with classically trained chefs at Buitenverwachting and at Grande Provence in Franschhoek where he was executive chef. He now runs Gigi Rooftop at Gorgeous George in central Cape Town. 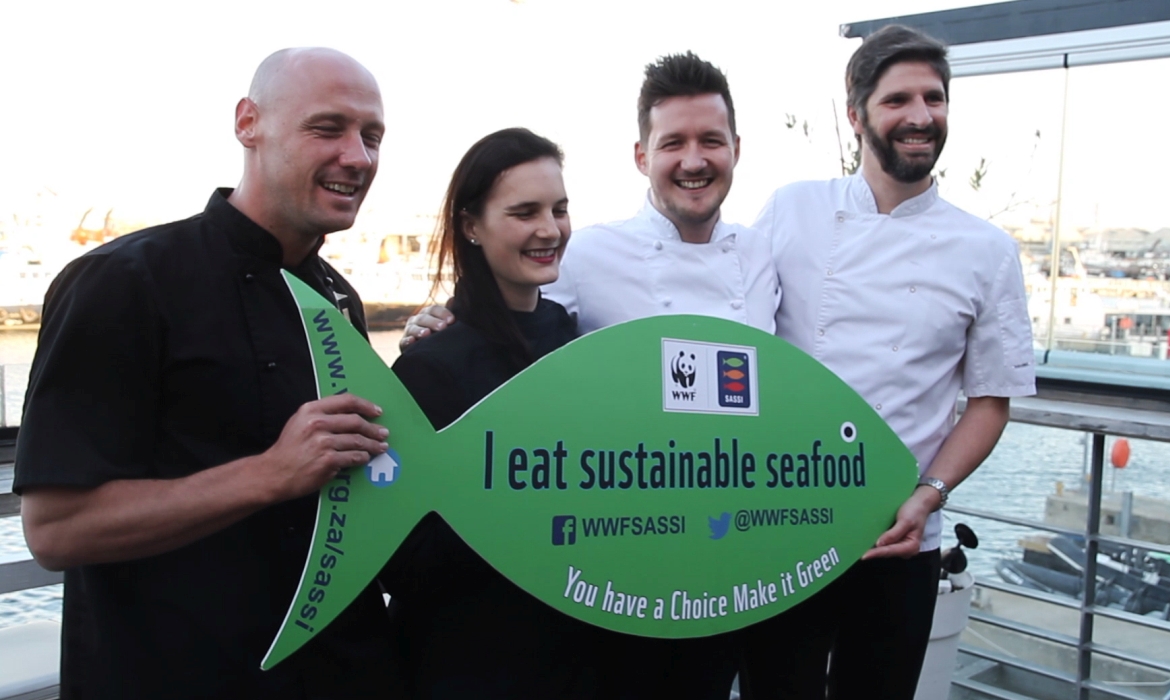 WWF-SASSI Trailblazer chefs for 2019 were announced on 21 October. From left, they are Gustaaf Boshoff, Nicole Loubser, Matt Manning and Kyle Knight. Two chefs, Guy Bennett and Carolize Coetzee, were also named but were unable to be at the announcement event.