Here's why we should all try to give up single-use plastics, not just in the month of July but forever.

Plastics are among the most prevalent materials currently on our planet and the cause of one of our biggest environmental tragedies.

Since plastics were produced in the 1950s in high volumes, these have infiltrated all aspects of our lives. Plastic is one of the most pervasive materials in our lives because they have been punted as being reusable, recyclable, durable, cheap, lightweight, safe and eco-friendly. These are all true, apart from the last one.

Due to their durability and the cost-effectiveness of production, plastics production and use of single-use plastics have increased beyond measure and in doing so have outstripped our capacity to manage our plastic waste.

As a result plastics make up 75% of all marine litter. What this means is that eight million tonnes of plastic waste is deposited into our oceans every year that is equivalent to one dump-truck of plastic dumped into the oceans per minute. It is estimated that at this current rate, by 2050 there will be more plastic then fish in the ocean by weight.

Our dumping of plastics in the oceans has far-reaching consequences for all marine life due to entanglement, ingestion and the altering of ocean habitats. The United Nations in 2018 estimated that over 100 000 marine animals die from plastic pollution per annum.

Humans are not exempted from the effects of plastic pollution in our oceans. Social impacts include less benefits from reduced access to coastal environments, and recreational activities. Significant economic impacts on tourism, economic losses experienced by fisheries and other marine sectors, more importantly micro-plastics often found in cosmetics and household products, have been shown to enter the human food system through a variety of commercial fish and shellfish species.

A recent paper in Science estimated that South Africa was the 11th worst offender in the world when it comes to releasing plastic waste into the sea. The reason for the scoring, coming in ahead of heavyweight polluters India and Brazil, was because of the unfortunate combination of a high per capita consumption of plastics (estimated at 2kg per person per day, almost as much as the USA) and the high proportion of ‘mismanaged’ waste not entering a formal disposal scheme (56%, compared to 11% in Brazil or 2% in the USA).

Most marine litter is plastic packaging – single use applications that are particularly prone to inappropriate disposal. According to research surveys, 94% of litter washing up on South African beaches is made of plastic, of which 77% is packaging. The amount of litter washing up daily in Table Bay has tripled from 1994 to 2011, far outstripping the 60% growth in Cape Town’s human population over the same period.

What is the solution? Waste plastic has value – it can be recycled, renewed, reused and reinvented. The challenge is to establish efficient ways of using that value. For single-use plastics the best way to help would be to refuse these.  What you would use for perhaps less than 12 minutes takes 400 years to break down in the environment.

9 single-use plastics we can all do without

1. Plastic shopping bags
Buy and use re-useable bags which are strong, environmetally friendly and savvy and pledge to #rethinkthebag!

2. Plastic coffee cup lids
Bring your own coffee mug along.

3. Drinking straws.
Plastic straws are one of the most ubiquitous litter items on South African beaches, and have been found to kill seabirds when ingested. Invest in a reusable straw or do without.

4. Plastic water bottles
It can take up to 26 litres of water to produce a one-litre plastic bottle and three litres of water to make one litre of bottled water. Bottled water is not only expensive to buy, but the plastic manufacturing process is resource and energy intensive. Take a reusable bottle to work.

5. Earbuds
Until the 1980s, earbud sticks were made from rolled wax paper. Use ones with paper sticks.

6. Plastic sucker sticks
These pose a similar problem to earbuds. Reverting to waxed paper would solve this problem.

7. Sports drink bottle lids
Bottle lids are one of the fastest growing litter types. Sports drinks with push-pull spigots use more plastic than conventional lids, and the clear plastic covers are particularly prone to littering. Mix your own sports drink and reuse the existing bottle.

8. Individual sweet wrappers
Sweet wrappers are another super-abundant litter item, especially at urban beaches. Avoid them at all cost and don't put them out for office meetings.

9. Expanded polystyrene food packaging
Widely used in the fast food industry, fragments of polystyrene cups and trays are one of the most ubiquitous forms of litter on our beaches, with an average density of three pieces per metre, and peak values on urban beaches of up to 30 pieces per metre. Lobby your favourite takeaway to change their packaging. 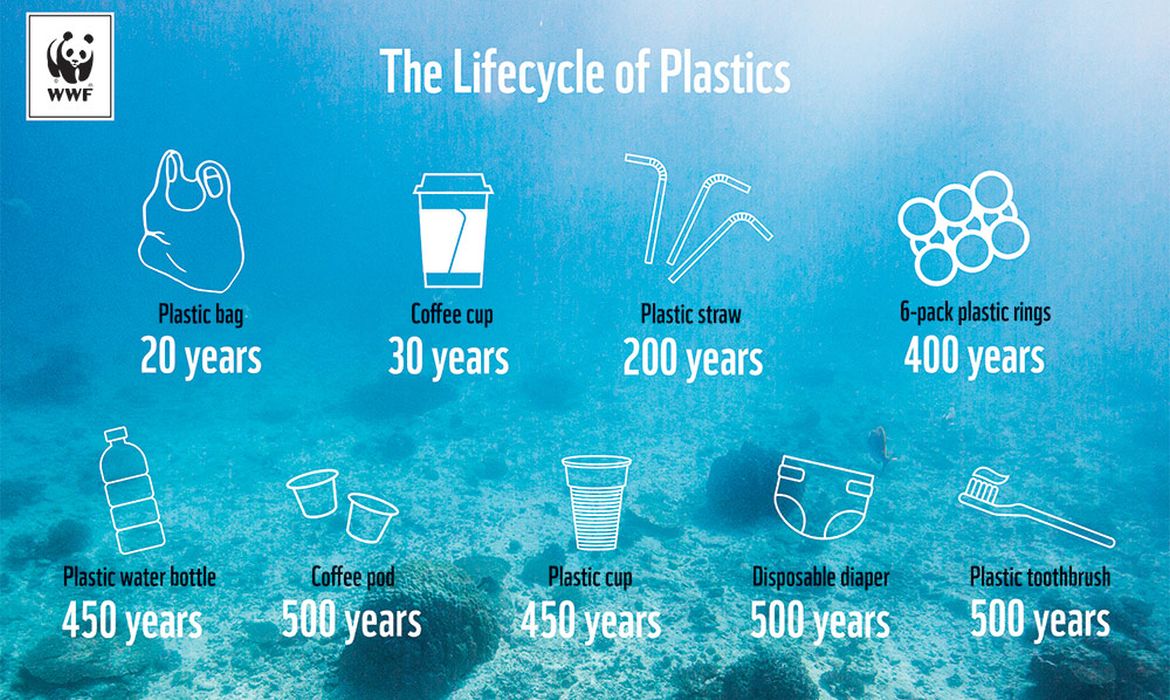 Single-use plastics can last for hundreds of years