Although recent rains and heavy snowfall have brought relief, the impact of the severe drought in the Western Cape is far from over. In some areas, such as the Little Karoo, farmers are still battling the drought that started in early 2015.

The agricultural sector remains particularly vulnerable to water risks and a changing climate. This document talks about how to build resilience in agriculture and looks at some adaptation responses and lessons learnt that may help the province in a future of increasing water scarcity.

1. Is water scarcity the “new normal”?
Water stress is the new normal – and many farmers have started to adapt and innovate. Climate scientists predict that the Western Cape will become drier and experience moderate to strong warming over the next 100 years. By 2050, the rainfall in the Western Cape will likely have decreased by about 30% from current levels. Less rain not only has an impact on dams and surface water but affects the extent to which groundwater is recharged. Along with rising temperatures and increasing evaporation, the implications of drought and climate change for long-term water security are serious from a food security perspective too.

2. How has the drought affected agriculture in the Western Cape?
The drought has had a significant impact on agriculture, livelihoods and communities. Estimates are an economic loss of R5.9 billion in agriculture in the Western Cape alone, with a resultant 30 000 job losses and exports dropping 13-20%. This is due to reduced farming outputs and additional income losses as export volumes decline. Many hectares of productive fruit trees and vineyards have been removed ahead of the normal replanting schedule due to the lack of available water as well as to prevent disease and pests from spreading. Stock farmers have also suffered heavy losses. As a result, many agricultural businesses risk bankruptcy. Finally, the impact of increased water tariffs is adding to the need to ensure optimal water efficiency on farms.

3. So how much water does agriculture in the Western Cape use?
In the Western Cape, 43% of available water is used for irrigation. Nationally, in 2014/15 the Western Cape used 15.5% of available water compared to Limpopo’s 18.9% and KwaZulu-Natal’s 14.9%. Although the Western Cape has the largest area under irrigation (269 476 ha) it also had the lowest water use per area unit (5 874 m3/ ha), showing that efficiencies have already been put in place. In the same period, Mpumalanga had the highest water use per hectare irrigated (9 913 m3/ ha) and Limpopo the second highest water use per hectare (8 841 m3/ha). The average water use of some irrigated crops are pome fruit 8 280 m3/ ha, table grapes 7 910 m3/ ha, stone fruit 6 550 m3/ ha and wine grapes 5 980 m3/ ha. In comparison, citrus (summer) requires 9 250 m3/ ha and sugarcane 9 140 m3/ ha. It should be noted that these figures represent the actual crop water use and system/ irrigation losses should be added to obtain the volume of water required per crop.

4. How important is agricultural water use for the economy?
Although irrigated agriculture uses a large proportion of the country’s available water resources, the importance of this sector for the economy and for food security is undisputed. The Western Cape is the country’s leading exporter of agricultural commodities, including deciduous fruit and wine. In this province alone, agriculture sustains a R530 billion economy. This sector employs around 180 000 workers, while the agri-processing sector adds another 126 000 jobs to the economy. Together, these sectors employ 15% of the provincial labour force.

5. How is agricultural water use allocated and accessed?
Water allocations are based on the yield of a specific river system, and each system differs. Farmers usually get their water from an irrigation scheme (a shared distribution system) and some from on-farm water resources such as storage dams which are filled by mountain streams or pumping water from the river. In irrigation schemes, water is distributed through a network of canals and pipelines to reach the various farms in the vicinity of the river system. At the farm level, water is stored in irrigation dams or applied to fields using different irrigation methods. Many farmers also use boreholes to access groundwater resources. For all water users who get water from the Western Cape Water Supply System, they are metered and their abstraction is monitored either by the local municipality (in the case of urban use) or by irrigation boards and water user associations (in the case of agricultural use).

6. How did the cut in water allocation to agriculture play out during the drought?
On average, the agriculture sector in the Western Cape has had to cut its water use by 60% since 2017. Water restrictions varied from 50% in the Breede Valley, 60% in the Berg River and Riviersonderend region and 87% in the Lower Olifants River Valley (Clanwilliam, Klawer and Vredendal) towards the end of the past irrigation season over the dry summer months. As a result, there has been a significant decline in overall output as farmers prioritise crops with higher profit margins, such as fruit, and choose to abandon vegetables and other crops. Agriculture has had to compete with urban water use (industrial and residential) during the irrigation season. Even if the province receives rainfall that is in line with average rainfall patterns, it could take between two to three years for dam levels to recover sufficiently to justify lifting current water restrictions. A multi-year crisis like this one can also put pressure on future production seasons. Hence, farmers will have to continue to find ways to reduce use and innovate.

7. What are the potential negative impacts of irresponsible water use?
Most of the critically endangered river ecosystems are concentrated around major economic and agricultural hubs. Here, threats to water resources and over abstraction are highest. Rivers in farming areas are often bulldozed to turn them into canals in order to regulate water supply and stop flood damage to orchards and crops planted in floodplains. This affects the natural structure and functioning of a river which can result in serious river bank erosion and loss of agricultural land during heavy rains and flooding. Another increasing problem is the excessive use of fertilisers and harmful pesticides on crops, vineyards and orchards which ultimately contaminate freshwater resources downstream.

8. So what can farmers do to become more water efﬁcient?
In water stressed South Africa, farmers will have to get innovative in order to produce more with less, especially when it comes to freshwater availability. Precision farming is becoming increasingly important. Many fruit and wine producers are already using the latest agricultural technologies and online tools to provide insight into water use on their farms. This helps them to become more resource efficient and water smart. Collectively, though, agricultural water users need to look beyond their farm gate to the state of water resources at a wider catchment level. Near Ceres, for instance, fruit farmers have shown that water security can be improved by tackling shared water risks upstream, such as removing water-thirsty alien invasive vegetation, combined with doing education drives with the surrounding communities downstream. In the Boland and Elgin regions, many farmers are actively engaged in water stewardship initiatives facilitated through their local conservancy or fire protection agency which has resulted in fuller dams and a decrease in fire risk during the drier summer seasons.

9. What have we learnt from the drought in the Western Cape?
The drought has highlighted the need for future-proofing agriculture through greater resource efficiency and improved resilience to climate change. The need to monitor water use and manage our available water resources at catchment scale is paramount. Given the increasing water shortages, stopping the spread of water-thirsty alien plants in crucial catchment areas is also a priority. It is estimated that these invasive plants are currently reducing the water supply to the Theewaterskloof Dam by 30 million m3 per annum. This is equivalent to the full capacity of the Upper Steenbras Dam. Water risks affect all the different water users in the province. Ultimately, we are all in this together.

10. What is WWF doing to help?
WWF and its partners have already shown good examples of improved land use planning, better production and responsible farming practices in the Western Cape. This includes the building of partnerships within the fruit, barley and wine industries. WWF also works with government and industry to restore and reconnect natural areas and to reduce the environmental impact of food production. 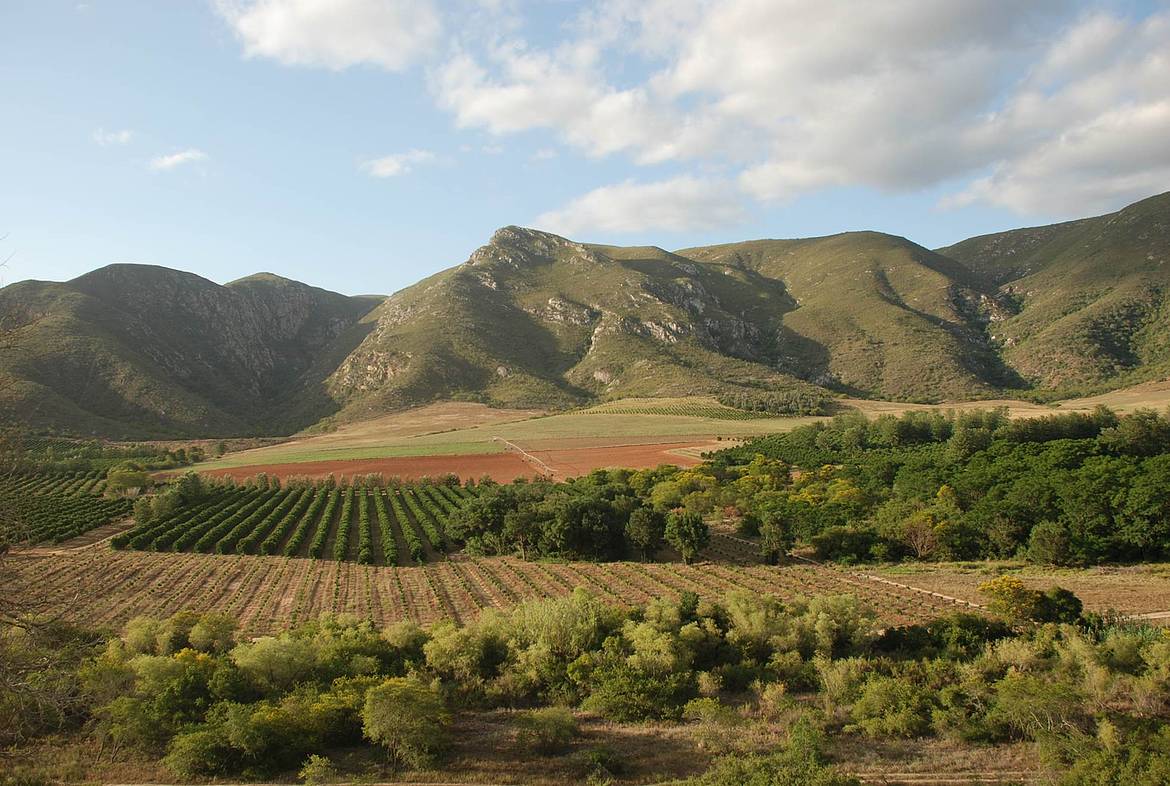