While with the then Natal Parks Board, he was closely involved with the organisation’s rhino translocation programme, which was responsible for the down-listing of white rhino from “critically endangered” to “vulnerable”. Now with WWF, he’s helping to do the same for the critically endangered black rhino.
“Unfortunately for black rhino they are rather shy. They tend to be solitary, and they need huge tracts of land because they don’t like other rhino close to them. It makes them difficult to manage, and is one reason their numbers have not increased as white rhino numbers have,” Dr Flamand said.

There are about 4000 black rhino alive today. There used to be hundreds of thousands but they were heavily poached. At the worst point in the early 1980s there were only about 2000. That number has slowly crept up because of intensive conservation.
“Ultimately conservation costs money. One of the problems for government is that it doesn’t have adequate resources to do it properly any more. So other formulae had to be found,” Dr Flamand said.
One such formula is the WWF/ Ezemvelo KZN Wildlife Black Rhino Range Expansion Project which aims to increase numbers of the black rhino population by increasing the land available on which they can breed. It does this by forming partnerships with landholders who have the potential to sustain significant black rhino populations, ideally of 50 or more. Founder populations of black rhino are then released on to the sites. There aren’t a lot of single landowners with the huge areas required – up to 20 000 hectares or more in Zululand - so the Project encourages neighbours to remove their internal fences and manage their properties as a single ecological unit.
“People had been talking about dropping fences for years, but there had been no attraction big enough to make it happen. When we came along with the carrot of 15 or 20 black rhino, fences started dropping all over the show,” said Dr Flamand.

In order to boost the growth of the black rhino populations in protected areas, a certain number of animals have to be removed each year. In the past, Ezemvelo KZN Wildlife used to sell those black rhino on auction. Private landowners who could afford them would buy a few, but they didn’t contribute to the national black rhino metapopulation.
‘What was needed was to put all of those rhino in one big new place and let them breed. That’s what the project does. It was a courageous decision by Ezemvelo KZN Wildlife. They chose to forego the money they used to get on auction and do the right thing for black rhino conservation,” said Dr Flamand. “The arrangement is that Ezemvelo KZN Wildlife retains ownership of the original founder population, but ownership of the progeny is shared. This creates a strong financial incentive for project partners to manage their black rhino populations. But love for conservation has been the driving force. The common thread through the people who have helped make the project work was passion.”

When choosing partner sites, Dr Flamand aims for large chunks of land that can sustain significant black rhino populations, but also keeps an eye on possible links and corridors between sites. “When we started I was looking at maps all the time. My dream was to join Mkuze Game Reserve to Hluhluwe-iMfolozi. It might be feasible to join the blocks of land we’ve created with black rhino to Ithala Game Reserve, and it’s certainly feasible to join with Isimangaliso Wetland Park. One of the best parts of the project is seeing fences come down. Fences are very unfriendly to species requiring large areas, like black rhino, elephant and wild dog. The black rhino project has shown that it’s of value to concentrate on one species because that can be a catalyst for protection of huge areas which then has a knock-on effect.”

The Project also tries to create a significant stake in conservation for local communities. The fourth project site is owned by a community which successfully claimed five game farms under the Land Restitution programme and decided to retain some of their land under conservation. “Communities need a tremendous amount of support and mentoring. They are coming into a very competitive eco-tourism market. We’re seeing that one of the most workable models is when the community leases its land to an experienced operator,” said Dr Flamand.

During his career, Dr Flamand has handled thousands of rhino, during translocations and while treating them for man-induced injuries. “I like black rhino because they are difficult and temperamental. With my work first as their vet and now more strategically with WWF as their ‘protector’ or ‘spreader’, I feel I’m making a difference. ‘Critically endangered’ means if you do nothing, there is a good chance they will disappear.”

Security is a major part of rhino conservation, and the project helps to fund measures that improve security in source populations. But attack is part of defence, and the project’s aggressive management for black rhino population growth is part of that strategy.
“Our growth rate was a bit disappointing at first but there seems to have been an acceleration of calves, possibly because we’ve moved out of a drought cycle. We’ve already had five calves this year. In time this should snowball into almost a rhino factory. The issue will then be where we put them all,” said Dr Flamand.

The project is currently assessing potential sites in Limpopo, Mpumalanga, North West Province and Swaziland. Once all possible safe sites in South Africa are filled, then the strategy may also be extended to countries like Mozambique and Zambia.

The WWF/ Ezemvelo KZN Wildlife Black Rhino Range Expansion Project is funded by WWF-Netherlands and is supported by the Mazda Wildlife Fund. 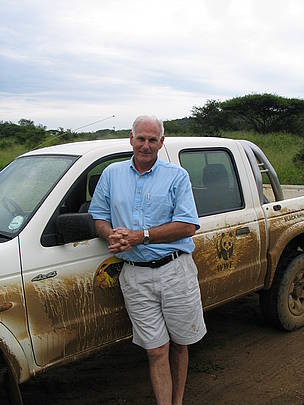