The WWF Black Rhino Range Expansion Project (BRREP) is one of WWF's most successful species conservation projects ever. This is welcome news in a time of relentless poaching.

BRREP was established in 2003 by veterinarian and project leader Dr Jacques Flamand. Over the past 16 years it has established 11 black rhino populations in private and community reserves in KwaZulu-Natal, Gauteng and Limpopo. They were created from founder black rhino populations translocated from provincial parks in KwaZulu-Natal and the Eastern Cape.

The project is central to the goal of increasing the population growth of black rhinos, which are listed as critically endangered, with only 2 000 left in South Africa. Black rhinos once numbered more than 100 000 across sub-Saharan Africa, but from the 1960s poaching for their horns decimated their numbers to less than 3%.

The WWF Nedbank Green Trust is supporting the next stage of rhino population management at BRREP through a programme that started in 2017 called Black Rhino Conservation Management Through Science-based Support.

'Through this project 90% of the DNA samples from all the rhinos in the 11 BRREP populations have already been collected,' says Flamand. 'This enables us to make informed management decisions about when to swap out dominant males or their offspring, and when new genes need to be brought in to maintain genetic diversity.' It is also a key tool in rhino horn crime-fighting and anti-poaching work.

The DNA samples are taken at BRREP sites whenever black rhinos are immobilised for medical checks, horn removals or translocations. Another four parks managed by Ezemvelo KZN Wildlife have been added to the project for DNA profiling.

Of the DNA samples collected from the 11 BRREP populations, 80% have been profiled so far. The samples are then submitted to RhODIS – (http://rhodis.co.za) the national rhino-DNA-indexing system for black and white rhinos that was initiated by the Veterinary Genetics Lab at the University of Pretoria.

The genetic samples as well as data gleaned from ongoing monitoring at all the project reserves also offer strong insight into black rhino social associations and reproductive behaviour. Male and female black rhinos mature sexually at six or seven years old and can live for up to 35 years. 'We are in the fortunate position where the offspring of the black rhinos in the 11 project populations have reached adulthood, and some offspring can be removed and translocated to form part of a new BRREP population,’ says BRREP project coordinator Ursina Rusch, who has a master's degree in zoology.

Analysis of black rhino reproductive behaviour was successfully used in November 2018 for a BRREP site that required detailed genetic information to make an informed decision with regard to the live removal of rhinos to maintain genetic diversity. The paternity testing of offspring assisted in identifying the most suitable individuals for live offtake, as well as planning regarding the retention of founder rhinos, particularly the population's dominant bull.

A black rhino stud book and genetic management plan for each of the BRREP sites are in process and have been reviewed by a number of rhino geneticists with positive feedback. The management plan is the first of its kind for black rhinos.

The &Beyond Phinda Private Game Reserve in northern KwaZulu-Natal, spanning almost 30 000 ha, was one of the first range expansion sites for the black rhino programme when it received black rhinos from Hluhluwei–Mfolozi Game Reserve in 2003.

'It's been an incredible success story and private game reserves have proved that we can manage and monitor state assets with great success,' says Phinda Conservation Manager Simon Naylor. 'A number of calves from the founder population have been born on Phinda and because of the population increase, BRREP has since been able to translocate four black rhino offspring from Phinda to other reserves.'

The handbook covers various rhino regions – from the dry, mountainous Kunene region of Namibia to the moist, coastal region of KwaZulu-Natal. As part of gathering information for the book, a group of experienced rhino reserve managers, conservationists and scientists from South Africa, Zimbabwe, Namibia, Mozambique, Kenya and Zambia met in March 2018 and shared their extensive knowledge.

'We greatly appreciate the support of WWF and the WWF Nedbank Green Trust,' says Naylor. 'These projects are a win-win for everyone at a time when the world is experiencing rhino poaching fatigue already. We are in a high poaching region and we have to continue the fight. We spend a lot of money on dehorning, notching, intensive security plans, counter-poaching dog units, special-ops teams, stringent visitor management and access control, staff biometric systems, constant community collaboration and engagement, and a reward system for information on poachers. Now we also have the DNA profiling and genetic management plan, which significantly assist us.'

'Communities are key to the success of anti-rhino poaching and conservation efforts and we have spent a lot of time engaging the communities in our area and including our communities in education programmes. Two-thirds of Phinda is community-owned – we lease the land from the communities and we constantly meet with the tribal authorities, who play a key role in anti-poaching efforts.'

The WWF Nedbank Green Trust strongly supports partnering with communities in conservation and is funding projects under the WWF-SA Wildlife Programme that are working with three communities adjacent to key wildlife areas that have rhino populations in KwaZulu-Natal, Limpopo and along the Mozambican border of the Kruger National Park. 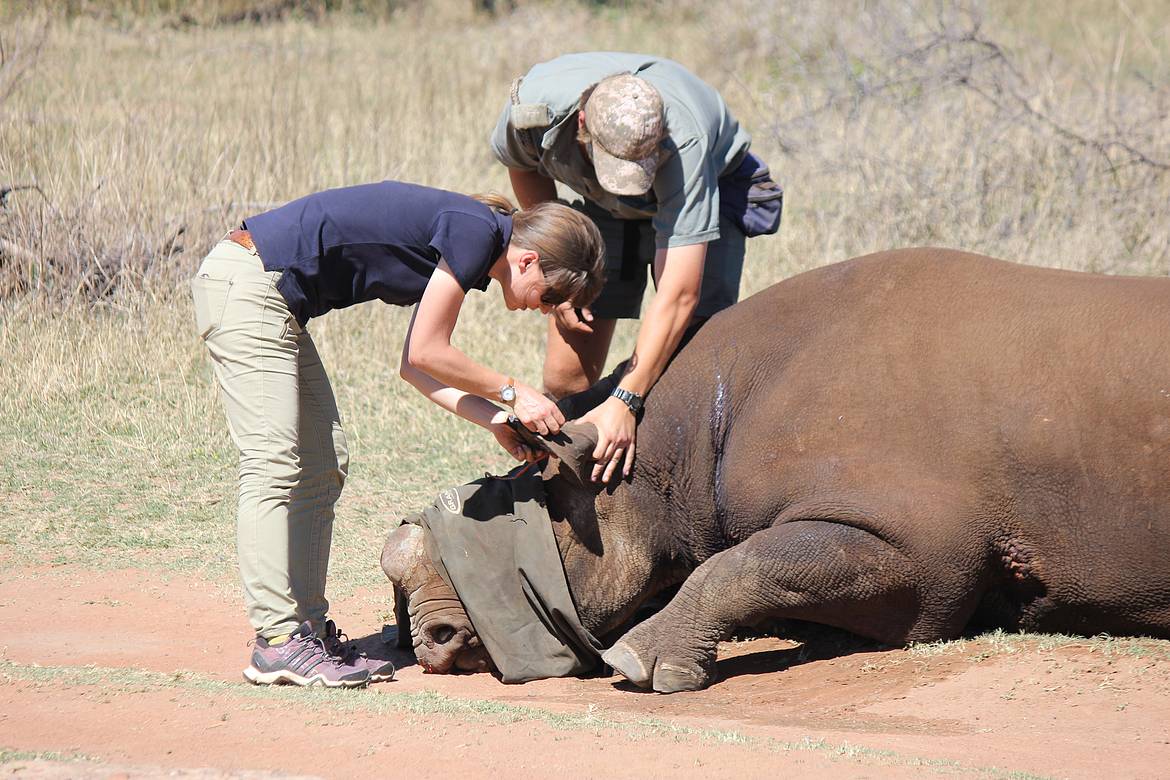